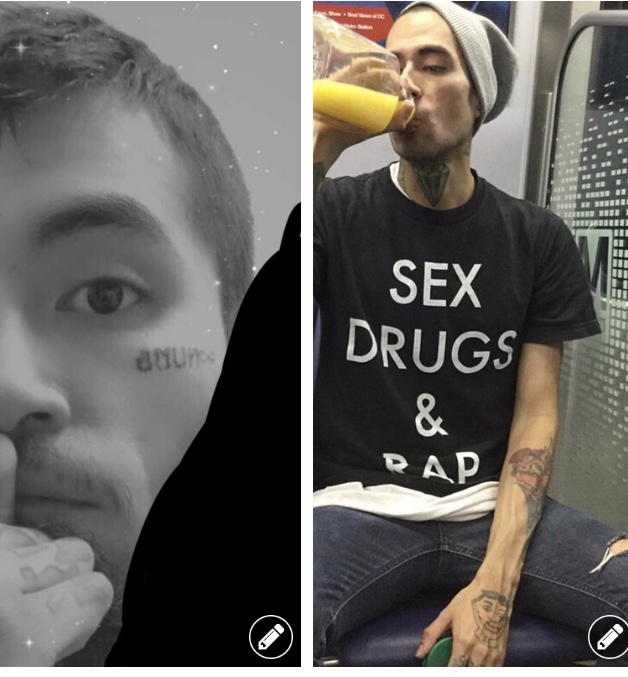 Johnny Anthony Funez Arlington VA. Hey I have some shit to say about this man but I’d prefer to stay anonymous.
Johnny Anthony Funez aka ‘’struggle’’ is a serial abuser. He is cheating on his wife with with multiple women and using his mental illnesses as a way to get pity and slide in people’s DMs if they say they have the same or similar disorder. He says he knows how to manipulate mentally ill girls for anything he wants because he says they’re so desperate they will deal with anything and any abuse. He has a clothing company called Numb Forever LLC or Heartless Clothing but he has NO merch, No one knows why he did this other than tax fraud and again showing off to naive girls that he’s a ceo or some shit. He will go over to new girls houses to party because he isn’t allowed to drink or do drugs near his wife or his mom he still lives with and immediately start talking them into sex when they show they’re drunk or high before he is. He physically abused his wife he denies having so bad that she had a stillborn baby girl and the ex before her was abused so bad she is now asexual and has a bad drinking and drug problem to cope with what she went through because they started dating when she was a TEENager and he was in his 20s.
He is cheating on his wife with her too even though the asexual ex girl admits all of their sex is forced on her, she cannot let the man go because he’s been abusing her since she was a teen. He then manipulates HER into harassing his wife with how she’s ‘just jealous that he picked her again’ when he’s still married and to distract from the horrible person he is and tries to make it a wife vs ex girlfriend thing while he kicks back and laughs at all his successful manipulation. She’s just as much of a victim as his wife yet here they are fighting over a man that is out fucking someone else they dont know. Afterwards he rewards her and gives her with gifts and money and expensive shoes for harassing his wife so she is convinced she’s doing a good thing by harassing his wife that is mourning their baby. I think her being traumatized by Johnny since she was a teen has caused her to be mentally stunted so she doesn’t realize harassing a wife like that isn’t okay or normal. For some girls he just wants sex out of off of tinder, he will get hotel rooms for days at a time and make up lies about what he does for work and says he is just traveling for his music career that does not exist. he does not tell ANYONE that he has herpes and ‘’thinks it’s fun to hurt people with a piece of me forever’’. He has cut marks all over his body because he says it’s how he proves and manipulates to outside people or police that he only abuses himself and doesn’t hurt others but that isn’t true. It’s all a lie and manipulation and he’s fucking crazy. He DOES hurt other people. He will try to kill himself in front of his victims when he’s done something wrong or caught cheating to gaslight them into staying and make them forget all about his abuse and his serial cheating. Then the cycle repeats. He will sit there and talk about how he’s the man with the ladies over this too. He will pretend to be obsessed and in love with his victims but that quickly fades and he’s off to find another new girlfriend. He works 3rd shift at a grocery store so that is the perfect time for him to cheat all night and all of these girls are convinced “their mans” is at work or he lies about his schedule flipped. Ladies, stay away from him. Ask yourself why he supposedly says he makes so much money but has nothing to show for it. I know he puts on the sad puppy dog I hate myself and I want to die emo kid dramatics and has found a good angle for his diseased dick pics to trick you into thinking he’s this perfect sad lonely big dick huge pocket baller everyone has treated bad and given up on that can buy you anything you want but he is an extremely abusive married man. He will tear you apart mentally and then start to physically beat you and in the end you will be convinced it’s your fault and apologizing to him while he is having sex with his next victim that doesn’t know the truth about his life and what’s about to happen to her and how many permanent diseases she’s about to have. After seeing this for years I am washing my hands clean of him and his psychotic antics. I’m ashamed of how I sat by as this built up to this extreme. I also want to add that he’s in the hardcore music scene just not professionally like he lies about which goes from philly down to Richmond that scene is notorious for older men going after clueless unrealizing teens like he did before. If he finds this out he will say this post is a lie and threaten to sue or do the sad boi shit and agree and talk down about himself so u feel bad for him, but anyone can go to his work and see his scars and hopefully this makes more of his victims speak out and prevent more of them.